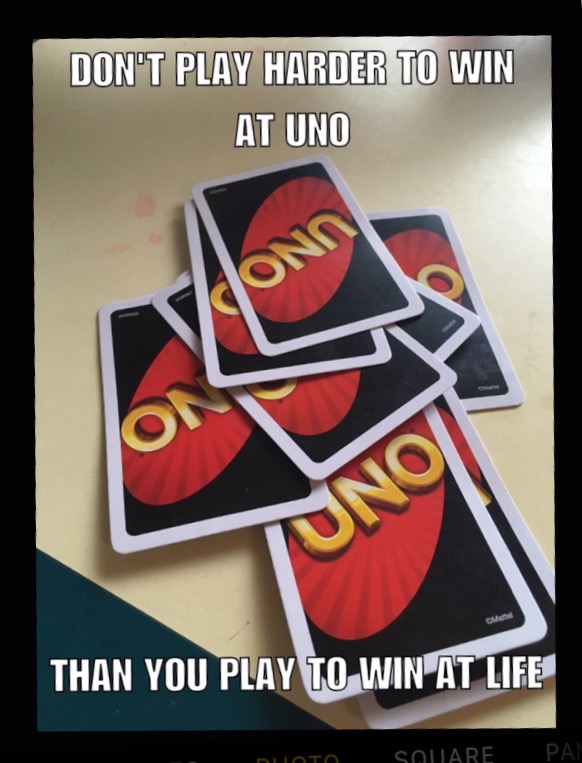 This past weekend I was playing the card game UNO with my niece and her boyfriend. I hadn’t played in many, many years. But as I sat down to play they gave me a quick refresher course. Next thing I know I won. That felt good! So naturally I wanted to win again. I started feeling that competitive side of me I swear all the time I don’t have. 😜I go on to win 3 in a row! Some smack talk happened. 😬 After that third win a thought hit me. Sometimes we (including myself) try harder to win a card game than we do this game called life.
You see after we “lose” at something, a job, a relationship, dieting/exercising, getting our finances back on track, and anything else that means something to us, we tend to feel so defeated that we give up. We lose our fight quickly. Now after I won 3 in a row, I lost a game. And you know what, it fired me up to try harder. I lost the next game. Which fired me up even more! Unfortunately (or fortunately) the sun came out so we decided to go lay out on the lake we were visiting, I didn’t get to play again. But I think you can see my point. I became so fired up after losing, like I just knew I could win the next game. I’d strategize better and win! But I haven’t always done that in life. I’ve been quick to count myself out. Even after just one loss. Saying things to myself like “you’re stupid” “you’re worthless” “you can’t even get this right” “no one wants to be around someone like you” and more. Maybe some of you can relate. I’ve gotten much better at how I talk to myself, it’s a process though. I can’t help but wonder how I can be such an animal about a card game, but such a coward at life sometimes where outcomes really matter. Well I think it’s because the outcomes really matter.
You see unlike in a card game, in life, the outcome of a situation can shape my life. The direction it takes, how I view myself, how others view me, the people in my life, and more. But here’s the thing, that’s the very reason we should be fired up after a set back. We should fight for where Our life goes, (not that we have total control, what will be will be) but that should not stop us from working to get where we want to be. We may not control everything, but we do control our effort. We should fight for how we view ourselves, to be proud of ourselves. That we never give up no matter what! Now how others view us is not as important on how we view ourselves, but we can agree that we like when others are proud of us. Never let that become your driving force though. Let you be your own driving force. You and God. We should want to fight to better the lives of those around us, our children, spouse, family, friends. They win too when we win!
I’m not saying win as getting more money, bigger house, nicer car, expensive vacations, and so on. To me winning at life comes through feeling good about ourselves, our choices, the love we give to others and receive back, the people we help along the way, the difference we make in this world no matter how big or small. It’s getting up everyday with great expectations of what’s to come! That’s winning at life! Living it! Not hiding from it because we expect to lose. So just like I said above, if you do lose at something (and we all do) let that fuel you. Take some time to strategize if you have to. But then come back more determined than ever to win! Now don’t do it by harming others like we would in UNO, you know draw 4 and so on. In fact life is the opposite of this game. We win in life by helping others, not harming them or their chances at winning too. You see in this game called life, there is enough room for more than one winner! Come on! Let’s get out there and play! ❤